The Brock Betz Band is an instrumental rock band hailing from southeastern Wisconsin. Their brand of Melodically Driven Instrumentals and Fiery Live Performances is an experience that can’t be missed!

The multitalented musicians are:

They have been jamming and performing together since fate brought them together. Their debut album,”Unchained,” has afforded them to perform large music venues such as Summerfest in Milwaukee, WI.  The band also performed at SRIMfest at Route 20 OutHouse, Racine, WI.  “Unchained” has become more than noteworthy, with Internet radio airplay time, on Rock Rage Radio. Steve Porter, part of the on air staff at Rock Rage had this to say,

“It’s rare to find an elite talent with the passion to match it. That’s what you get with Brock Betz.

He has to play the guitar.

He has that thing inside him that fuels him to play, as if it is essential to his existence. I’ve been around long enough to see guitar legends from the 70’s up to today, he’s as good as any of them.”

Brock, the lead guitarist, affords the live experience, centering on his fast legato style that he has perfected over the last 12 years. After discovering artists such as Joe Satriani, and Steve Vai, Brock sought to play the guitar, at a high level and one day take the stage as an instrumental artist himself.

Adam, the bass guitarist, connected with Brock in 2017.  Adam is influenced by artists such as Cliff Burton, Geezer Butler, Steve Harris, and John Paul Jones. He has played with many different talented musicians that have brought him to his high level of talent today.

Max, the drummer, joined Brock and Jeremy, rounding out the trio in 2015. Brock and Max have been jamming, writing, recording and performing for over 10 years. Amongst many talented drummers, a few of his top influences include, Dave Grohl, Neil Peart, and David Weckl. His unlimited endurance and rapid rudiment, draws everyone into his rhythm.

2014 was a very busy year for Brock. Since March, Brock has gone on to do interviews with Rock Rage Radio, MaxInk (a widely read and distributed music publication in WI) and articles from Brett Khilmire in the UW Post. 2014 saw The Brock Betz Band performing around the state of Wisconsin, Illinois and down to Memphis Tennessee.

The band is also a member of the Wisconsin Area music Industry (WAMI). We can also be found on Facebook, Reverbnation, YouTube and Spotify.

The most important part of The Brock Betz Band has always been and always will be their fans! Without them, and their continued support, they would just be 3 guys jamming. 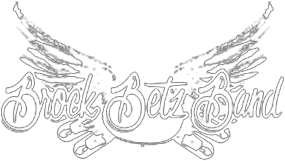